Album Review: Take Me Back To America 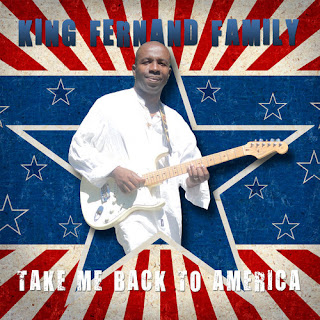 Received an interesting set of music today here at DjjD Studios headquarters. While I've never been really knowledgeable about R&B music, it's always fascinated me in a way that few genres can. Something about the chill vibes, the memorable basslines, and sensual vocals have always gotten to me. It's some of the most mood invoking material, and while blues may have been a major inspiration, R&B maintains its own feel with positivity and relaxation. King Fernand Family, born and raised in New York City, makes his own statement in the world of R&B with "Take Me Back To America", reflecting his love for this dear country. Featuring 8 Urban/Hip-Hop/Rock songs and with an impressive distribution lineup (Amazon & Google Play), he's certainly gotten his music around.

All of the tracks have a certain reggae, downtempo feel. You can hear the influences of Jimi Hendrix and Bob Marley as the guitar shreds; the song speaks of peaceful intentions. I can wholeheartedly hear this album as part of a 90's surfer soundtrack or as part of a Sublime remix compilation.

It took me a few listens to really get into the swing of things, but overall a worthwhile listen.

Let's go into a few of the tracks:

"Take Me Back To America"

The first moments of the song, reminisce of an older, wiser New York city. The feels of this song put you in the slums or the business districts of that old American city in slow motion just so you can explore the world around you. It's your first time in the city, unknown to everyone...you wander.


The 2nd of two songs he sent me initially...totally different vibe with this one. Featuring a more prominent guitar role, the "rock" genre label for this album, stands true. A very classic rock vibe with a downtempo type beat great for a slow moving "get-together".

Only enough room for 2 tracks this time, unfortunately...however the whole album (as stated above) is available at Amazon & Google Play.

Overall: While, I'm no professional in this department of music and have never concerned myself with R&B before now, I enjoyed this album. It has potential in all the right places, the production is clean (most times), the live instrumentation is enjoyable, and (for the most part) the vocals are a nice addition. There's good to be found in most music in the sense, you'll hear a sound you'd never thought you'd hear. While most people put their concerns in production & arrangement (and rightly should), it's important to take notice of the human creative spirit and see the roots of where music really comes from.

Soul Music in every sense of the word.

P.S. Thanks for reading everybody! This makes my 9th blog post!

Email ThisBlogThis!Share to TwitterShare to FacebookShare to Pinterest
Labels: Review