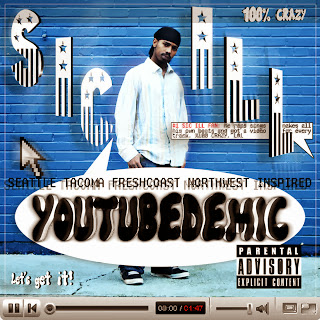 From the square waves represented in the first song, "iRepresent" to the phat beats of "Downtown Streets", there's no doubt, 'Youtubedemic' features a diverse range of audible content. This laid back, groovy, and fun compendium of slick and varied tunes has touches of Afroman and Gorillaz while maintaining a healthy dose of originality. As you listen more and more through the tunes, you begin to notice how many different sets of drums this artist goes over. Favorite tune so far is: City of Glass.

For those of you listening to this who are audiophiles, you might be turned off by the sounds used. The problem I sense with some of these tunes is that they feel a little cluttered; overwhelmed by bass. However, the creativity and arrangement of each tune, is enough to pull me through to the next track. It's a nice change, compared to most of the other rap I've been listening to; it gives it an authentic underground feel.

The way I look at it, production values and modern mixing is the icing on top of a cake. But sometimes, that icing can be laid on a little too thick and in turn would ruin the cake. Occasionally, you like that extra sugar but every so often, it's nice to take a step back and appreciate the baking process that took place.

I really enjoyed some of these tunes, and I'm glad I took the time to listen to it a few times over. It's creative, original, and it varies from tune to tune. For a free download, I'd say this is a nice find. :)

All too often nowadays, rap is sort of a "toss-up". While you generally have a good idea of what you're going to hear when you know one particular artist, chances are it won't be the same experience when it's someone you don't know. When you picture rap, either you'll have the positive, enlightening rap that talks of personal experiences, downfalls, and general advice or you'll have the rap that talks of hoes, money, drugs, and the supposed good party life. To put it in short - with the help of my girlfriend - this is exactly what I mean.

Thankfully, KDC sheds his perspective on the world. 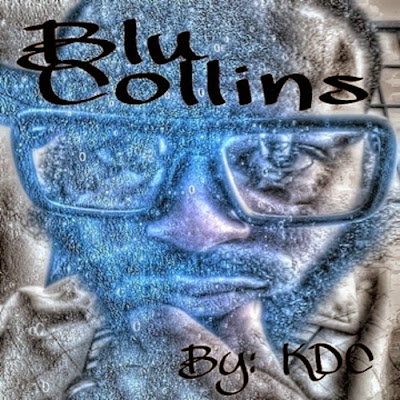 'Blu Collins' is the first LP produced and written by KDC and it marks the beginning of the artist's album streak. KDC has been a producer for the past 10 years and labels his music as alternative rap. The album has a very clean feeling; that is a nice surprise. That said, sometimes there's a time and place for the wrong words, but I digress. As I had a few moments to talk with the artist, he simply stated:

"With the latest project Blu Collins it includes more of a rhythmic melodic feel. I'd like to be seen as a positive artist with real life content that pertains to what I've been through and what I'm going through. I've been doing music for over ten years and I kind of just dove in."

There's some really interesting songs on here, such as "The Verdict". Some interesting hooks, smooth lines, and a clear message; I'm getting some pleasant vibes from these. It almost feels like Wiz Khalifa but more inspiring. It's like gangsta rap, but...promotes happy thoughts instead.  What a trip!

All of that said, there are some things I can hear that I would...like to hear better. The intro, "My Melody" features a radio-esque intro as if you're changing the stations, which is nice, except right after you're greeted by a THX sound clip that slowly moves into a beat with vocals that feature far too much delay. It's a spoken word intro that tells the purpose of this album however, this is probably the weakest point of the soundtrack.

This is an awesome first album that would appeal to plenty of rap/hip-hop enthusiasts. It's short, coming in at just over 30 mins long; it may even feel a little disjointed between songs but rest assured it's something to try out if you're sitting at your computer searching for music hours on end.

Check out KDC at all of the links below: