Stained Glass Studios, is it a band? Is it a supergroup? Is it a glass blowing factory? The name simply poses too many questions for one to solve. It's simply too big a mystery for me. Or is it? Lead by Mike Antonio Jr. and Curtis Gruver, this new single advocates one's longing for a relaxed, happy, and cool life.


This song promotes the simpler things in life by its audible representation itself and while the name might not imply that (maybe?): the general structure, soft vocals, and casual nature of the percussion pushes you along a seemingly positive and serene journey. Remember years ago in a time where you thought about nothing, and looked up at the stars while eating some KFC? Yeah, it's kinda like that.

At 0:02 seconds in, you'll feel like you dropped something off of your desk. Until 0:25 the song is very reminiscent of 90's ska punk, with the quick guitar plucks followed by the bass. If you like bands such as Slightly Stoopid, Sublime, hell even The Mighty Mighty Bosstones, you'll find your head bobbing soon enough.

The music video is a trip, not as in a psychedelic one. The song spans 4:20 but, the clips that make up the video can't be more than 4-6 sec long per shot. So the video tells a tale of a party but it's done so in a way that matches up with the song; it makes you feel like you were there. Plenty of close-up shots on this have been either: slowed down, sped up, clipped, repeated, lightened, cropped, and otherwise mutilated. But? It works and works well.

Stained Glass Studios is a new band to watch out for in the future. This might be a first time endeavor but it's a strong one. It's one that really strikes an impression to those who listen close enough. If you've heard it more than 5 times, listen 5 more. Spread the word, fight the power! Peace out. 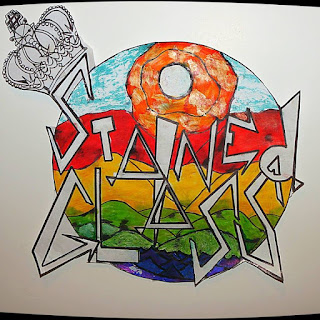