Album Review: Eye of the Storm by Flexstyle 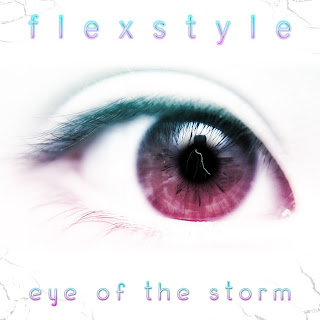 As this marks the first, full length album review...

It's nice to open up with an album I've listened to time and time again. Michael Birch (a.k.a. Flexstyle) has been a force to be reckoned with for years. With his time on ACIDPlanet, to Overclocked Remix, to finally making it on the Electro Freaks label...the guy has made his way to some pretty big names and projects with humility and elegance. His ability to combine different elements of music shows he's a diverse artist with a knack for big beats and progressing melodies. I find myself inexplicably thumping my foot and therefore it begs the question, "How does he do it?"

Identifying himself with both EQ mastery and catchy hooks, Flexstyle will continue to make a name for himself.

Now then, let's get started shall we?

Eye of the Storm

#1: Unvanquished (Prologue): What a soothing way to start an album. It tells the long path ahead and gives the notion of the dangers that pass with each footstep. You find yourself in a deep jungle, at the edge of the universe, and somehow in the comforts of your home all at the same time. Your mind begins to wander...

Well I remixed this one.

That said, this is easily one of the most powerful tracks on the album. Unleashing an entirely new feeling of adventure and excitement, the standout drums and crunchy background pads fill the soundscape with explosive chords and electrified bells. I can't get enough of it. There's definitely a catchy melody in this one and if this song doesn't cause some myoclonic jerks in your feet...the next song surely will.

#3: Chaos Prime: The moment I listen to this, I get a sense of danger. The people on this quest...have just encountered their first enemy, a ruthless being who seeks nothing but to create destruction and turmoil. As the adventurers go unnoticed, they pass through Chaos Prime and enter an entirely new civilization...

#4: Agua Fria: An ancient race of beings who's existence has long past...the large bass, the deep wispy pads, and the chugs of the guitars leave you wondering if this place is safe. Have you traveled too far? Where are the denizens of this age-old world? This is an excellent track.

#5: Triumph of Innocence: Whoa, drum and bass everybody, hold your colour (please tell me you guys got that reference). This is certainly a colorful track. Hi-hats a plenty, pitched bass drops, and a full blown half-time section along with those electrified bells first seen in Voltage. At the risk of sounding like an anime fanatic (for which I can assure you, I am certainly not), this reminds me of Dragonball Z. Yes, the English dub ones, they're the only ones that are any good. Explosive track, this one. One of the highlights of this album, folks. Check it.

#6: A Quiet Literary Interlude: You needed a break after that last track? Me too, and I think Flexstyle realized that too. This track certainly lives up to the title of the album as this is most assuredly the "Eye of the Storm". Utilizing a trip-hop type beat, vocoded textures, and various snap, pops, and stutters through sliced, glitched beats...this track is incredibly soothing.

#7: Frostbite: In recent times, this track was promoted all over his Soundcloud, for a contest. As for this version...what a track. I'd say this is the heaviest track on the album. Keep your toes covered, this one bytes.

#8: Supernova: With this one, I see some new sounds being used. The chippy, 8-bit sound makes its way into Flexstyle's production. With numerous elements going for it (along with being the longest track on the album), this track begs to be played on a large sound system. It's a journey through and through.

#9: Weeping Clouds feat. Hollidayrain: What a collaboration. Both prolific producers in their own right, Hollidayrain teams up with Flexstyle for a one of a kind progressive house tune that is both huge and long (that's what she said), wait..

#10: With Friends Like These: Are your friends in the Ming Dynasty? Flexstyle seems to think so. This track embraces the more organic, ethnic inspired vibes of the broad electronica genre. Very interesting contrast between this and the last track.

#11: Eye of the Storm, Part 1: Escape: Like the intensity of "Triumph of Innocence"...we see our 2nd drum 'n bass inspired track of the album. This has gotta be one of the most light-hearted "escape" tracks I've ever heard. You begin to realize at this point, this adventure was one of self discovery and...oh my, that is a beautiful solo around half of this track. Right, where was I? Listen to this track.

#12: Eye of the Storm, Part 2: Aftermath: Introducing the same feeling as the previous track, this one is a bit more mellow. It is the beginning of the end for our travelers...and what a expedition it's been.

#13: Resolution (Epilogue): You stand on top of a mountain, the highest peak in a land far, far away...you recount your travels with your friends and you look at the world...a changed person. A little more wiser, you continue on your next trip...eager for the unknown.

#14: Weeping Clouds feat. Hollidayrain (PrototypeRaptor Remix): As the result of another contest held by Flexstyle...PrototypeRaptor took 1st place. This track takes what was already established in the original and bumps it up to 8.3 on the Richter scale. Excellent remix.

Overall: While this album is getting close to two years old, it's one I still treasure to this day. Judging on both the concept of this album and the production, this is a very clean and well thought out product. When you're looking for new electronica to listen to and you don't know where to start, this review should be an indication that...through the cracks and crevices of the internet, there is gold to be found for those who take the time to search.

Thank you for reading.

Email ThisBlogThis!Share to TwitterShare to FacebookShare to Pinterest
Labels: Review