Huff Da Author, a musician, a producer, and a businessman.

Since the age of 5, he has been actively engaged in the genre of hip hop/rap and what might've started out as a fun, creative output as an adolescent has since been built into a reputable compendium of music. Along with making his own music, he has assisted artists such as Infamous Mobb, Wordsworth, Crime Luciano, and countless others.  A multi-instrumentalist, Huff also demonstrates to be proficient at both piano and bass guitar and on top of all of this, Huff seeks entrepreneurship. In 2013, he made a reality when he launched "Purple Empire Music Group, LLC" with Crime Luciano. 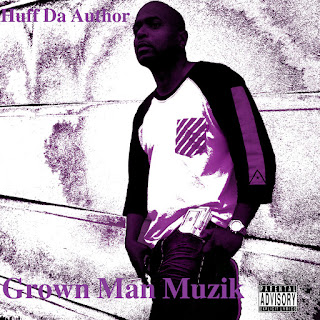 "Grown Man Muzik" is a 13 track album featuring the talents of Huff Da Author, Crime Luciano, and Michelle Graves. With almost 50 mins in length, there's a lot to be heard and as this whole album is dedicated to his grandfather who recently departed from this world...there's a lot to be appreciated.

One of my favorites of the album, "I'm Up" breezes through like a late night stroll. It's chill, it's smooth, and the vocals provided by Michelle Graves add a soft, gentle touch to an otherwise dark, atmospheric audible experience. One of the lines, "I refuse to fall until my feet touch the ground," is interesting when taken out of context. It almost represents a balance between success and failure. You can be lifted, raised up on a plateau of success and when on that high you can experience great things. But when the moment has passed you need to be able to adjust back into reality and easily plant your feet on the ground, like a Boeing 777 after 12 hr flight. Genuinely, really enjoyed this one.

While this song and its lyrics are reminiscent of modern rap and I can't truly relate to the words being spoken, there is a language that I can understand clearly: Production.

As the song starts, I can clearly hear and define which instruments belong to their respective frequency ranges. For example, the kick is well represented here with the sub hitting between 50 Hz and the rest of the layered kick having a steady drop around the 300 Hz range. The hi-hat triplets sit around 8 KHz - 12 KHz and looking through a spectrum analyzer, the vocals feel clean and prominent in the mix. However, I feel they could've been boosted a tad around the 5 KHz range to stand out a little more.

Instrument choice is really smooth for the most part, and to be honest, the only part that didn't jive for me was around 3:18 mins. That nasally instrument that appears - to me - distracts from the mix. Personally I feel a more natural instrument, whether it be a glass marimba or a solo violin, would've complimented the drums (Tabla?) used in that same spot. Other than that, this is well produced song and would definitely gain traction around various hip hop communities, be it online or sold in person.

As the song opens up, I believe this is something we all experience at some point in time: Being in an environment, growing in that environment, and eventually having dreams or aspiring to leave said environment due to well, changing times. The opening pad represents an empty void that a lot of us feel, and the thoughts spoken after, are a constant reminder of what we hope to obtain in our delusions of grandeur. Fake people, fake places and the roaming madness in your subconscious telling you are meant for greater things shouldn't open up Pandora's Box to the plethora of negative emotions, it should be a sign for positive reinforcement.

I appreciate this song on many levels, mostly because through its storytelling, has managed to convey a sense of inspiration. As far as I'm concerned - whether I took it on a purely emotional standpoint, rather than a conventional production standpoint - should be the standout track of the album.

I rather enjoyed Huff Da Author's album. Utilizing modern techniques of the digital audio workstation production world and acquiring the unique talents of both Crime Luciano and Michelle Graves this album will stand as a testament to Huff Da Author's ongoing success in the world of music. And while I don't know how long this album took to create, I can imagine a lot of care and effort went into making these tracks sound their best. Creativity is the spice of life and production is its container. If I had to summarize "Grown Man Muzik" as an entree, it would be a rich, savory Beef Wellington: Tough around the edges with a light crust, but get to the middle for a delectable, easy to digest interior.

Available in all digital stores on Feb. 27th!