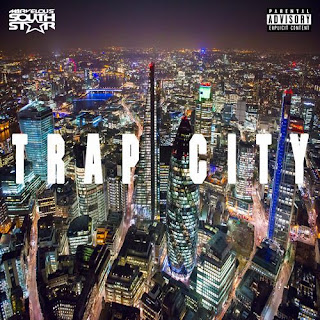 'Trap City' by artist Marvelous Southstar (Marlon Carter) is a 7 track EP filled with a nice blend of contemporary hip hop/R&B laden beats. His smooth style paves the way with effortless fluidity combining rich vocals and polished beats. In my perspective, this album is both definitions of "trap" meaning the way the album is laid out, it traps you, captivating you to listen. Then from the first song, "Trapped" you are seized by a song that...incorporates trap. Very creative way to get your audience listening.

Some of my favorites:

Actively talking about what seems to be his life, Marvelous displays intense verbal rhythmic uniformity by conveying straight forward facts that pertain to: ability and sustainability or adaptation to recreation; sometimes spirituality to self-identity. The roots of this song are buried in what seems to be a cloud of despondency; it strikes deep because most (if not all of us) have felt the urge to break free. Set aside to concerns of monotonous everyday life, unshackle yourself, and be independent. Standing on your own two feet, being prepared for whatever life brings...that is what this is about. A liberating feeling but not without a sense of responsibility.

At 0:28 the lead synth drops into a clean 4/4 beat with a heavy bass (808?) complimented by an airy hi-passed pad. The drums drop out about a minute in and the artist takes center stage, professing feelings about a girl, talking about finances, giving a moment to the fans, and going back to talking about his girl. It's a simple, catchy tune that could get anyone moving in a club, but to really explore the emotional depth of this song, would require a new paragraph entirely.

His song brings up a point: What is worth your time? Concentrating on what we deem most valuable can cost what little moments of reconciliation and pleasantries we have in this world. What if you talked about how being focused on your life and wife has impacted your own stability, financially or emotionally? What consequences have you faced from being in a position where multiple things you care about repeatedly cause distress? Maybe I'm looking too deep but the song doesn't explore very many avenues in lyrical imagery. The song has a very defined structure and, being concrete in its arrangement, it allows one to "zone out". But the story-line, seems very general.

Everyone has problems and it'd be far from the truth to claim otherwise. Some deal with it in ways that tend to lean to the dark side (depression, anxiety, crime, etc) and others are more productive and creative. With relationship problems, there are two sides to every story. Each view could contradict dramatically from the other and with this song, we are allowed to hear exactly that from "call and answer" verses placed well between each chorus of the song. The beautiful vocals of Kagey Constance is quite a nice addition. It's a creative technique that really won me over and I believe more so than the vocals, it's the surrounding dark atmosphere that completes this track for me. A favorite for me. Recommended.


With a decent amalgam of decidedly favorable tunes, "Trap City" brandishes a swift yet cold Rapier onto the battlefield of UK Hip-Hip/Rap. His style is rapid yet subdued, providing a cornucopia of combos to achieve victory and claim a shot at the spot on top of the leaderboard. However, some of the sounds are re-used as intros and even though it's only a short clip you'd be surprised at what your brain remembers. It's a small issue on an otherwise swell journey. I enjoyed this album. You should listen to it. Thank you.

This album can be purchased either on iTunes, Amazon, or Spotify!